HTTP compression is ubiquitous on the modern web as a way to trade a small amount of computing power in exchange for vastly reduced bandwidth. It is usually achieved with the gzip algorithm, so I’ll refer to HTTP compression and gzip compression interchangeably in this post.

YNAP uses compression across the board to load pages faster, which makes users happier, and reduce bandwidth costs, which makes the finance department happier.

When we set up a new Kubernetes-based infrastructure for public-facing websites, we started using Ambassador as a reverse-proxy for all inbound HTTP calls, and Istio as a service mesh. Under the hood, both of these projects use the open-source Envoy reverse-proxy, originally developed at Lyft.

This setup has proved to be extremely flexible and performant, and after ironing out a few kinks we’ve been really happy with it.

However, after migrating a few countries, monitoring showed that our average page size and outbound traffic had grown a sizeable bit, which couldn’t be explained by the application payload: it had to be infrastructure-related. After investigating, we found out that gzip compression was much worse on the new stack than it was on the older stack.

… And that was despite the older stack not having gzip compression enabled at all!

We use Akamai as a Content Delivery Network. All calls to our infrastructure first go through Akamai, which ensures faster delivery thanks to having PoPs much closer to clients than our servers could be, and adds extra features like protection against DDOS attacks, caching, etc.

Do you have servers in Antarctica?

And, crucially… When a client supports compression, and the response that Akamai receives from our origin servers is not compressed, it will go ahead and compress it before returning it to the client. However, if the response from the origin server is already compressed, Akamai will send it to the client as-is: compression twice is useless, and decompressing + recompressing every request is wasteful.

So we decided to investigate: what is wrong with our own gzip compression?!

We wrote a small benchmark to examine the compression ratio of various reverse-proxies to see:

The benchmark’s source and instructions to reproduce can be found on Github: https://github.com/Pluies/gzip-comparison

And here is a representative sample:

Or as a graph: 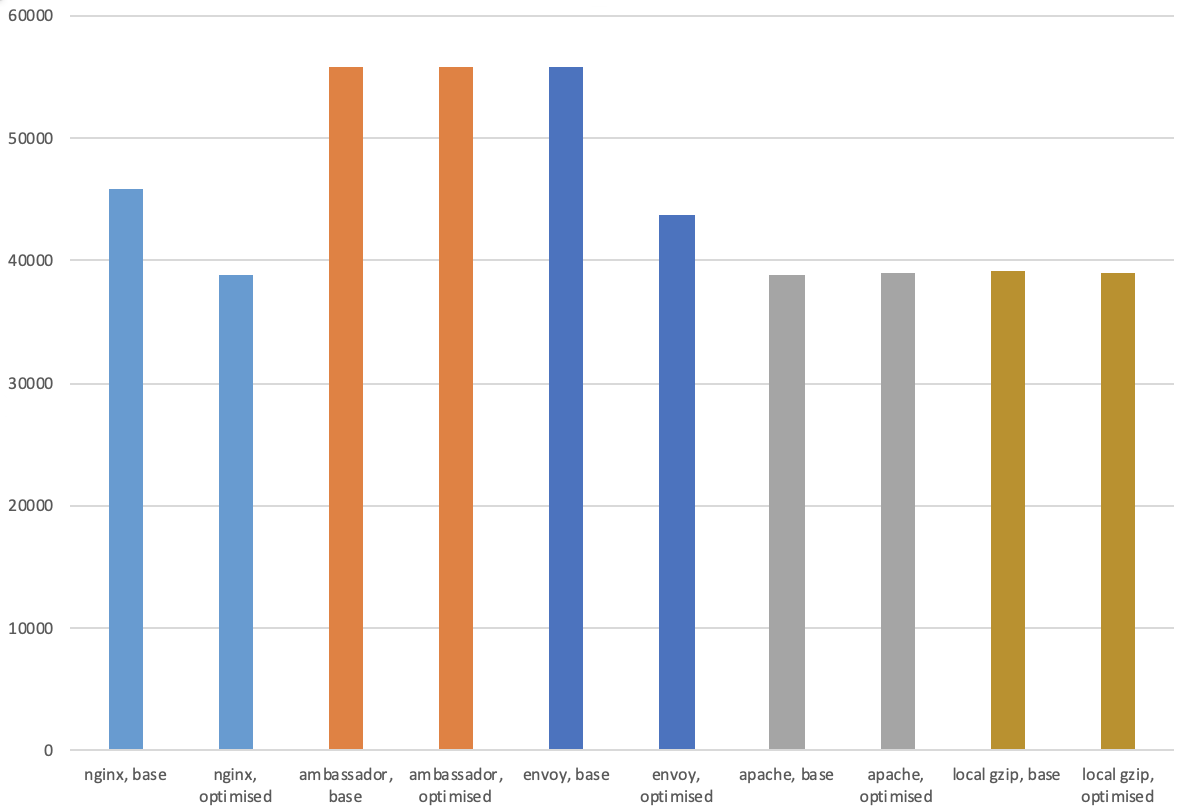 The results we saw in the live environment for Akamai were identical to optimised Apache / optimised nginx / local CLI.

The two main takeaways from this test:

Using Envoy directly, we were able to reduce the size by setting the window_bits parameter to 15, which produced compressed files about 10% larger than other servers. Still not ideal, but a sizeable improvement.

We also started using this configuration in our Istio mesh to enable compression as widely as possible.

Ambassador did not expose this setting, but it is open-source! We opened pull request #1890 which got merged within a few days. 🎉

Even after tuning all available parameters, we are still left with a ~10 to 12% performance degradation by using Envoy, compared to virtually all other options tested.

We’ve opened Envoy issue #8448 to report back our findings, with benchmark results. This is treated as a bug, and hopefully will be fixed in the future 🤞